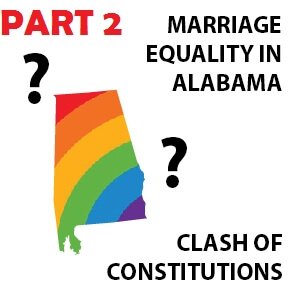 Essentially, same-sex marriage was legal for just over a week, but there was an intense amount of confusion from county clerks issuing licenses because of Chief Justice Moore’s last minute effort to delay the ruling by advocating for defiance of Judge Granade’s momentous decision. Many offices were unsure of whether to listen to Judge Granade or Chief Justice Moore and either refused to issue marriage licenses to same-sex couples or any couples, including heterosexual ones, hoping to apply. However, Judge Granade later clarified her ruling and ordered all counties to issue marriage licenses which paved the way for same-sex marriages to commence statewide.

Why Are Same-Sex Marriages No Longer Allowed?

Because of the legal confusion caused by Chief Justice Moore much of the state government was unsure of how to proceed. Moore’s defiant rhetoric has brought scrutiny onto the state of Alabama as many were likening the modern social resistance to the state’s prior civil right’s struggle with accepting segregation. Many deem Alabama taking a step backwards and solidifying stereotypes of Alabama’s “less-than-progressive” mindset. This was further cemented by the recent ruling from the state’s Supreme Court to halt same-sex marriages, a largely unanimous decision, despite the U.S. Supreme Court not interfering at the beginning of Judge Granade’s ruling back in February. This lack of interference has been interpreted by many legal officials as the highest judicial power’s way of hinting at their definitive ruling on same-sex marriage set to come sometime in late June and the outcome is expected to be in favor of gay marriage.

What’s Going To Happen Next?

It would appear to be that the standoff by Alabama will remain in place until the U.S. Supreme Court issues their definitive ruling. While the state supreme court in Alabama has declared the idea of same-sex marriage as “unconstitutional” they have openly stated they will abide by the U.S. Supreme Court’s decision, but nothing else. Those who did marry during the brief window are still recognized, but may face issues with benefits and the like. Moreover, the frontier that may affect many LGBT individuals are the various “religious freedom” laws that have been brought into the forefront of this rather messy civil right’s battleground.

With Indiana having recently passed such a law that allows businesses and individuals to deny services to anyone on the grounds that it interferes with their religious practices and beliefs, it has been heavily criticized on social media by several states and high profile business like Apple and Angie’s List. While the bill doesn’t directly state discrimination against LGBT people many have deemed it a gateway for discrimination and have predicted scenarios such as a doctors refusing to administer care on the grounds that the patient’s sexuality interferes with their faith. Arkansas is in the planning stages of enacting such a bill and Alabama is in talks of doing just the same. As for now, time will tell but if Indiana is any example, such a law would not bode well for the state and its image.