Marriage Equality in Alabama: Clash of the Constitutions 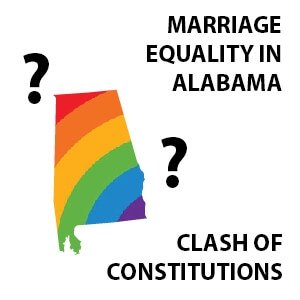 Without a doubt, it has been quite a historic week for the state of Alabama as it becomes the 37th state to allow gay marriage, but such a momentous decision has certainly caused a fair share of contention among legal officials and politicians alike, most notably Alabama Chief Justice Roy Moore. Many may remember the infamous brouhaha spawned by Chief Justice Roy Moore’s open defiance against a Federal Court’s ruling to remove a two-ton granite monument displaying the Ten Commandments, whose delinquency ultimately had him removed from the position as Chief Justice; however, he was re-elected in 2013. Chief Justice Moore has yet again caused quite the legal conundrum and confused many Alabama citizens and officials about the status of gay marriage in Alabama. Let’s clarify the past few weeks and set the record straight, no pun intended.

How Did This All Come About?

Essentially, the court case Searcy vs. Strange revolved around Cari Searcy and Kim McKeand, a gay couple who have been working for over a decade to legally adopt their son, but due to Alabama’s marriage laws the couple faced several legal roadblocks that prevented them from doing so. On January 23rd, District Court Judge Callie V. Granade, appointed by former Republican President George W. Bush, ruled in favor of Searcy and McKeand, thus striking down Alabama’s ban on gay marriage. Granade then issued a 14 day stay on her ruling for any appeals to be filed to the U.S. Supreme Court by the Alabama Attorney General. S.C.O.T.U.S. ultimately denied the request filed and refused to intervene. Judge Granade’s stay expired on February 9th and gay marriages were set to commence.

So Why The Confusion?

It’s no secret that the topic of gay marriage & divorce is a particularly sensitive one, especially with a definitive decision by S.C.O.T.U.S. looming on the horizon as they hear several different cases regarding the topic. A nationwide ruling on the matter is expected sometime in June. In the case of Alabama, Chief Justice Roy Moore, partly as a last ditch effort to stall the inevitable, ordered and argued that district probate judges, who are responsible for the issuing of marriage licenses, were not bound by Granade’s ruling and attempted to limit the ruling to only the parties involved in the original case, rather than all Alabama citizens. On January 27th, Judge Granade clarified her ruling to involve all Alabama citizens and struck down the marriage ban for a second time. Chief Justice Moore repeatedly cited biblical principles as his primary political defense, but only caused extreme confusion among probate judges and Alabama citizens in supporting judicial disobedience; however, this did not stop many counties from siding with a federal ruling and several began issuing marriage licenses on Monday February 9th to both heterosexual and homosexual couples.

The remaining dialogue surrounding this momentous movement particularly gravitates around Chief Justice Moore’s blatant, and often flagrant, disregard for judicial hierarchy. His behavior is reminiscent of his brief stint as Chief Justice in 2003 while he publicly advertises anarchy against any ruling the Supreme Court, or any other court, may attempt to make in the redefinition of marriage. What is being dubbed as the “clash of the constitutions,” Chief Justice Moore’s actions are painting Alabama in an all too familiar historical spotlight, as many look back to racial rulings that supported segregation. In the case of gay marriage, however, there is little Chief Justice Moore can do as almost all county’s are issuing marriage licenses to both gay and straight couples. The remaining grievances seem to only concern semantics at this point.